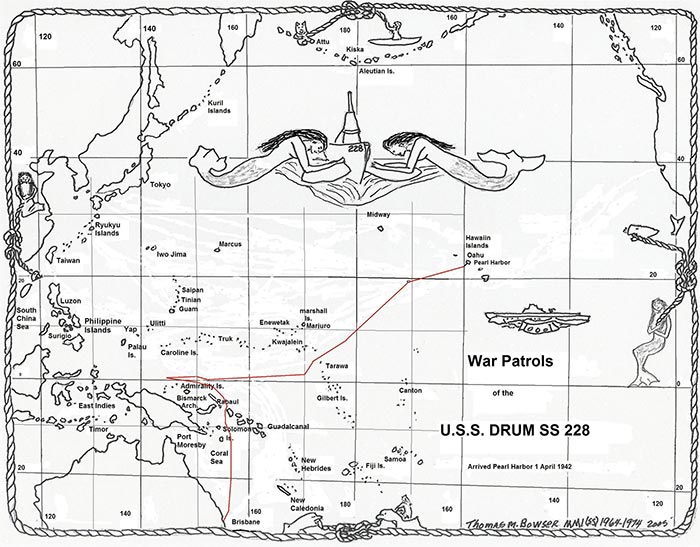 Clear sky, excellent visibility, light airs, and calm seas were the order of the day enroute to station and during the first half of the time on station. When the moon waned, the weather changed abruptly to a continually overcast sky, winds from the north and west up to force five (5), sea condition four (4), with heavy swells, and generally poor visibility with numerous squalls.

When the wind and sea remained steady for more than one (1) day, currents up to one (1) knot were experienced in the area.

In the pass between Feni and Green Islands a set of one to two (1-2) knots to the east was noted. The wind was from the west, force four (4), at the time.

The high grade sextant gave good results at night throughout the patrol.

On April 3, Nauru Island was reconnoitered. No shipping was observed anywhere along the western shore. No military installations were observed on or near the beach. There were about six (6) radio towers, of the single pole variety, at the northern end of the island. On the southwestern end, a large phosphate loading crane projected into the water. On the high point of the island, a tall mast with a possible radar screen was observed. This screen did not rotate during the several hours it was in sight. The position of this tower on H.O. Chart 2179 (Consec. 1632) is incorrect. It should be on the 213 foot hill.

In both convoys contacted, the enemy was searching with echo ranging on 18 kilocycles. In the first convoy which was successfully attacked, the escort counterattacked with depth charges, but none were close. In the second convoy, the echo ranging was heard at about ten (10) miles, although the escort was never sighted.

Three (3) daylight surface chases were attempted. Two (2) ended when a plane was sighted at a distance of five (5) miles: One, after six (6) hours; the other, after one (1) hour. No bombs were dropped either instance.

(1) For the third successive patrol, power was lost on the port screw when the port motor starter-motor field interlock failed to operate. The interlock solenoid coil was recentered and power was regained.

The Portsmouth Navy Yard, the Submarine Base, Pearl Harbor, and the U.S.S. SPERRY have attempted to remedy this defect. No change in the mounting of the coil has been tried, however. This solution should be applied during this refit.

(1) SD Radar - The performance of the SD radar was unsatisfactory. Two (2) planes were sighted in this area, but no indications were obtained on the radar. Its operation appeared normal in every respect.

(2) SJ Radar - The SJ radar was superb until after the attack of 9-10 April. From that time on, performance was erratic.

On April 14, 1943 no indications were obtained on a convoy of four (4) ships at 10,000 yards. Inspection of the entire equipment revealed no defects, however.

The range step was lost during the last week on station. The cause of the failure is believed to lie within the crystal tank.

A modification of the bearing indicator is recommended. During the attack on the escorted three (3) ship convoy, the radar operators experienced much difficulty in maintaining contact with the escort and the chosen target. A bearing indicator similar to the repeaters installed in the sound gear, giving both true and relative bearings would be ideal.

Reception of the NPM schedules was complete. The Belconnen schedules were received with little difficulty, although three (3) serials were missed.

Transmission to NPM proved more satisfactory than to stations in the Southwest area.

No results were obtained on the submerged loop on NPM's 16.8 kilocycles.

Sound conditions were average. The enemy had little success with echo-ranging. Likewise, we had difficulty obtaining a range by pinging in the attack on the unescorted freighter on April 18, 1943. No density layers were observed.

In spite of the warm weather, the boat was comfortable and dry. CO2 absorbent was spread prior to diving each morning, and noticeably improved the air at the end of the day.

The food obtained from the SPERRY was not of as high quality as that carried on previous patrols. Coca Cola syrup and several hundred CO2 capsules were enjoyed by all hands.

The health of the crew was excellent.

Orders of CTF-72 ended the patrol.

The torpedoes on this patrol were far from what could be expected fifteen months after the outbreak of war. Three (3) out of eight (8) torpedoes, fired in a single day, went off prematurely; and all torpedoes the Commanding Officer had the opportunity to observe, smoked excessively. It is disconcerting to say the least, to lug torpedoes several thousand miles through the trials and tribulations of a patrol, only to have them blow up in your face. I believe it wold be practically impossible to get hits on a vessel as alert and maneuverable as a warship in the calm waters prevalent in the Solomon Area, with torpedoes having the trail of smoke ours do.

This vessel was given a six (6) week's overhaul at Pearl (they call it the "50 cent job"). Considering the time allotted, Pearl did an excellent job, particularly on the C&R work. However, a longer overhaul period is recommended to eliminate the small casualties which arise after a rushed overhaul. A longer overhaul period would also enable all hands (particularly the Commanding Officer) to return to the States on leave. Personnel, like machinery, cannot keep on going without rest.

A daily news item, such as the fall of Tunis and Bizerte, would be appreciated by all hands.

During this patrol the air conditioning plant condensed 150-200 gallons of fresh water per day. This water is thrown away and cannot very well be used for washing, due to its offensive odor. This water has been analyzed, however, and is chemically pure. It is recommended that some sort of filter be devised that will eliminate this offensive odor, so that the water may be used for washing.

This is the third successive patrol that sticking of the port motor field interlock has caused us to lose power on the port screw. This casualty left the vessel with but one screw during the attack on a carrier during the fourth patrol. The seriousness of the casualty was stressed during the overhaul, but the same thing happened again. This interlock has been worked on by four (4) different submarine overhaul activities without remedying the defect. This leads the Commanding Officer to believe there may be an inherent defect in the interlock circuit, and at the first available opportunity a thorough check by a factory representative should be made.

During the last refit, the brass section of the conning tower fairwater was etched with a silver sulphate solution. This turned the brass a dark brown. Even though the paint fails to adhere, the brass surface is still non-reflecting.