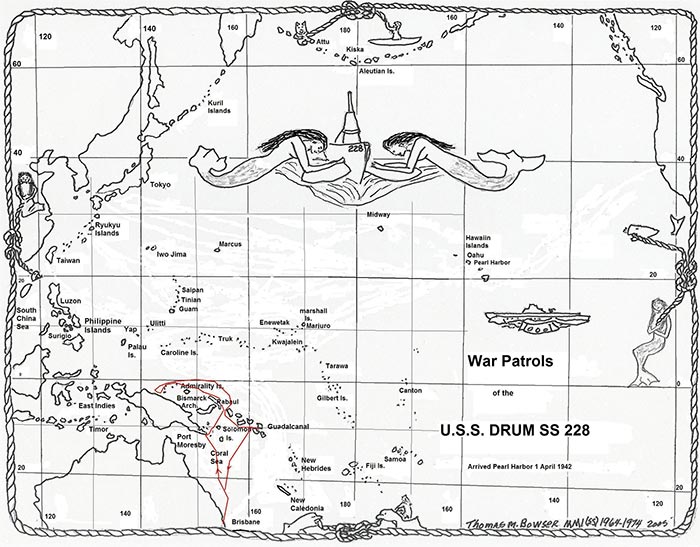 The area between the north coast of New Guinea and the Admiralty Islands was far more favorable for submerged operations than the areas nearer the equator. The average winds were force two, predominantly southeast to southwest. On five days the seas were calm and glassy; but during the remainder, sea conditions up to three were experienced.

Nearly every night extremely heavy lightning along the New Guinea coast was seen, which at times assumed the appearance of gunfire.

Variable currents up to one knot, setting southeast to southwest were noted well off the coast of New Guinea, south of the Admiralty Islands. A westerly set of one knot, close to the coast between Aitape and Hollandia, was encountered on four successive days.

No uncharted shoals were discovered anywhere between the north coast of New Guinea and the Admiralty Islands, between longitudes 147° E. and 140° E.

Sighted smoke of four ships at 1545 (L), 27 August 1943; heard echo ranging on 18 kilocycles at 1850 (L); tracked submerged, and estimated the convoy's course 310°(T), speed 7 knots until dark. Surfaced, and closed, stopping every half hour to obtain bearings on the pinging, which continued throughout the engagement. Made radar contact at 2230 (L) at 17,550 yards, and determined convoy to consist of five medium freighters and two escorts. They were traveling with three freighters in line, with one ahead and one astern. One escort led the formation; while the other brought up the rear.

The visibility was good, with a glassy sea, bright starlight, and few horizon clouds. The merchantmen were sighted at 20,000 yards.

(1) Hearing two torpedo hits in first ship.
(2) Hearing one torpedo hit in the second ship.
(3) Hearing the "ship breaking up" noises from the vicinity of the attack.

Tracked the convoy by radar, using a plot and the TDC. Determined the course as 310°(T), speed 10 knots. The convoy was not zig-zagging. Gained an attack position on the port beam of the leftmost ship, and took a course for a 100° port track at 15 knots, presenting less than a 10° angle on the bow to the target at all times.

Fired two more torpedoes, while swinging hard right and diving to avoid the escort bearing down from starboard, at a second ship beyond the first. Range by radar 4400 yards, torpedo run 4400 yards. Spread of 1/2°L, 0° using the offset dial, gave gyro angles of 26°L and 47°L. Results: One hit 3 min. 15 sec. after firing the first torpedo of this salvo.

Normal submerged approach, using bow tubes. The distance to the track was excessive, but the firing bearing was reached before the track could be closed. A torpedo run of 2000 yards on a 124°P track had to be accepted. Several good echo ranges were obtained inside 3000 yards. The spread, using the offset dial, was 1°L, 0°, and 1°R, a total of 200 feet.

The three torpedoes were tracked by sound to and beyond the target. The Commanding Officer saw heavy smoke from one torpedo pass under the target's counter, but did not see the other two torpedoes. One end of run explosion, jarring the boat considerably, occurred 5 min. 55 sec. after firing the first torpedo.

Though the TDC setup checked well prior to firing, the misses are attributed to low target speed set on the TDC.

Seeing one torpedo hit and watching the ship sink by the stern 93 seconds after the explosion. Two photographs were taken.

Normal submerged approach, tracking target with TDC, and obtaining echo ranges inside 3000 yards. Fired the stern tubes at a range of 1350 yards, using a spread of 2°L, 0°, 2°R introduced by the offset dial.

The second torpedo hit about fifty feet abaft the MOT, 52 seconds after firing. The third torpedo ran astern, but the first was not seen. Both the second and third torpedoes smoked heavily. There were no end of run explosions.

The convoy of attacks no. 1 and no. 1A was formed with an escort leading, followed by a single maru, then three freighters in line, another single maru, and finally another escort. The two escorts echo ranged on 18 kilocyles from the time the convoy's smoke was sighted until contact was lost twelve hours later.

The pinging, during darkness, enabled us to maintain contact until the SJ radar picked the convoy up at 17,550 yards.

The trailing escort sighted us, turned toward, and showed a small searchlight about 15 seconds prior to firing, at a range of 3000 yards. No counter measures were employed prior to diving, however.

The depth charging, which followed the attack, was as prolonged as the Drum has undergone in several patrols, lasting one hour and thirty-five minutes, with a sound search lasting about three hours. At total of 27 charges were dropped.

During the first half hour of the counter attack, several effective runs were made. Echo ranging was used throughout the attacks, and no evidence of listening was noted. One escort used single pings, while the other employed double pings. Both used automatic keying, and never, even during an attack, was the interval less than 8 seconds.

The first depth charge exploded close aboard when the boat was at 230 feet, going down, and knocked small bits of cork loose. It is of interest to note that the Drum has never suffered any material damage, never had any appreciable cork dislodged, never had any lights broken, and never had any "sundry" loose items thrown clear of the bulkheads during seven patrols, and numerous depth charges.

The first eleven charges were in the "fairly close" category. The other sixteen were increasingly farther away.

Evasive tactics included silent running at 300 feet, using 80 RPM most of the time. The initial courses were about 50° to the left of the chosen retiring course. The retiring course was assumed as soon as the enemy began falling astern.

During the last refit, an effort was made to synchronize the TBT's both electrically and mechanically. Two days out, both TBT's flooded out, and were useless the remainder of the patrol. A more accurate system of bearing transmission is desirable, though this ship has never relied on the TBT bearings during an attack. Renewal of the selsyn units has been requested, and may solve the problem.

After functioning well for the first month, the pitometer succumbed to a series of attacks and passed away on 17 September 1943. The final diagnosis is:
1. Rotary seal bellows contact surface non-corrosion resistant.
2. Control unit contact arm slips on shaft due to broken lower stop rod on bellows assembly.
3. Lack of all spares now shows up in all parts of the system.
A new control unit design has been submitted to the U.S.S. FULTON.

Twice main engine exhaust valves froze in the closed position after deep submergence and/or depth charge attack. This is due to the 75° angle seat, and can not be prevented.

Salt water was found in the starboard reduction gear sump for the third successive patrol. It is believed the water enters when the gear housing flange bolts are loosened by depth charging and vibration. Lock nuts are now installed, but a more positive means of preventing the housing from becoming loose is imperative.

#2 Vapor compression distiller again gave trouble, though its output was satisfactory. The compressor lobes were striking each other, and even after a complete overhaul, continued to do so. The gears are believed worn. A new compressor unit has been requested.

The U.S.S. FULTON finally solved the port 75% motor field interlock trouble, which has been with us for five patrols. A new interlock coil, frame, and plunger was installed during the last refit, and never was power lost on either shaft during this patrol.

No difficulties were experienced either in reception or transmission. All messages were sent to Australian stations.

There were no material casualties.

Not one minute of operating time was lost during the entire patrol. Land targets up to 45,000 yards, and ships up to 17,550 yards were detected. The magnetron installed has been operating perfectly for 1000 hours.

Operation of the SD radar is uncertain. On 28 September, it failed to operate on surfacing. The cause was the failure of a resistor and a condenser in the cathode ray tube power circuit. The following day planes were detected at 16 miles, and land targets, 8000 feet high, at 60 miles. A thorough adjustment of the equipment has been requested.

Although the time on station was spent in close proximity to known enemy radar installations (Wewak and Hollandia), no indications of radar were obtained. The unit apparently operated satisfactorily, for shipboard noises were readily detected.

All sound gear cables piercing the pressure hull were renewed during the last refit. No material difficulties were experienced during this patrol.

Sound conditions were average in the area between the New Guinea coast and the Admiralty Islands. Screws of small steamers were heard at 6000 - 8000 yards. Many fish noises made conditions poor at times.

The crew suffered the usual minor ailments concomitant a shift from the cool climate of Brisbane to the tropics. One man was given oxygen through an escape lung to aid his breathing when he suffered from a severe chest cold.

The food was definitely superior to that obtained from the U.S.S. FULTON for the sixth patrol. The addition of fresh frozen fruits and vegetables was appreciated by all hands. The meat, especially the steak, was more tender, and definitely tastier. Coca-Cola, made with water, and set in the cold room to "ice up" was a delicious drink at any and all hours of the day.

One-third of a can of CO2 absorbent in each torpedo room on the all day dives made the boat comfortable throughout the run.

In spite of a turnover of one-third of the crew during the last two refit periods, the state of training, as well as the morale, is excellent.

This is due to a combination of two things. First, the caliber of the non-qualified personnel obtained from the Submarine Division 82 is high. Second, a vigorous training routine has been established prior to leaving on patrol; and continued during the entire run. Seventy percent of the personnel aboard are now qualified.

The orders of Commander Task Force 72 to end the patrol.

The COUCAL was very cooperative. With her assistance several small casualties were repaired in a thorough manner in lieu of he chewing gum and bailing wire method in vogue while on patrol. The refueling was handled expeditiously; and 13,264 gallons of fuel, plus stores and fresh water, were received in two hours.

The shipping routes off New Guinea are very indefinite. I believe that small craft usually run close inshore, and that for this area, the best place to operate would be close inshore, above Hollandia, in the vicinity of Cape D'Urville.

The type voltage regulator installed on both the radio and IC motor generators is inadequate. The transmission of two messages was delayed until adjustment could be made to the regulator. The IC motor generators are run using "rheostat" control instead of regulator control. If no new design regulators are available complete reconditioning of the present ones is necessary.