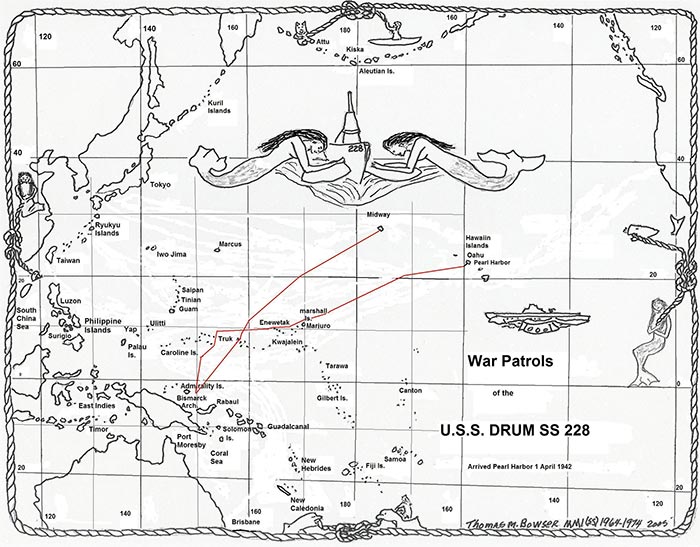 (1.) Narrative (All times are KING unless otherwise labeled)

The weather was generally fair. Heavy showers were frequently encountered resulting in zero visibility. The surface of the water was disconcertingly smooth practically all the time.

Same as Truk except that showers were a little more frequent. Heavy showers over the pass occurred usually about 4-5 o'clock in the afternoon, obscuring it from our view.

No strong or unusual tides or currents were noted.

Peaks and tangents of Islands at both Truk and Kavieng were excellent for cutting in the ship's position and simplified position keeping.

REMARKS: This attack was begun after sunset, and the firing took place in near-darkness. Poor observations probably caused the misses.

REMARKS: We maneuvered deliverately to attack with stern tubes to use up our Mark XV's loaded there with a view to having available a ten torpedo salvo unrestricted as regards gyro angles for the big target we hoped to find one day soon.

Though there is every reason to believe this target was damaged, positive evidence of damage of sinking was unobtainable due to bombing attack immediately after firing.

REMARKS: As the approach progressed, our fire control data looked excellent, promising a 900 yard range and 90° track. As the range closed to about 1500 yards, the TDC bearing began to lag badly. About a minute before our firing three sailors ran from the target's bridge deckhouse to her fantail. A last bearing was put on the TDC in an effort to get it in step. The delay gave us a bad track, probably a low target speed, and not much chance of hitting. Target either maneuvered to avoid or simply let our torpedoes go by.

The general picture of enemy A/S measures off Otta Pass was much like the familiar one off Pearl entrance. Small craft of miscellaneous types cruised aimlessly about, stopping, starting, and changing course frequently. This, combined with the glassy sea prevailing, made observation difficulty, and kept us on pins and needles much of the time.

Probably some of the many explosions in the Truk area were embarrassing charges covering shipping we could not see. But once or twice they were sufficiently close to the result of our having been sighted by aircraft.

The depth charge counter-attack following our unsuccessful attack on the destroyer on 17 August was remarkable in the shortness of its duration and in the fact that as far as we could tell, no sound gear was used. Both attacks were smartly executed and very close. The destroyer held her course for about three minutes after we had fired, evidently to insure that all our torpedoes had passed, then she turned and came right for the periscope. Her second attack came in on the port quarter. She passed right over us, but released her charges a little too late.

Main engine exhaust valves leaked throughout patrol. Serious defect developed in #3 M.E. exhaust valve which on three occasions failed to close until after ship had submerged. Valve was finally closed by repeated attempts with hydraulic power. Subsequent inspection topside revealed no apparent defect. #2 M.E. exhaust valve froze in the closed position on one occasion, and was finally opened with a crowbar under the rocker arm to valve topside. This type exhaust valve appears to be too delicate and temperamental for submarine use.

Negative tank flood valve gasket was blown prior to arrival on station. Tank was carried full thereafter. Loss of the use of negative tank is a definite military deficiency.

Excessive air leakage from the forward impulse bottles necessitated the adoption of the practice of bleeding them down each morning prior to diving.

During the depth charge attack of 17 August, the radio antenna trunk flooded. Most of the leakage was stopped by tightening up on the improperly locked studs of the handhole plate just above the pressure hull. The small leakage which persisted throughout the remainder of the patrol was probably due to damaged insulators.

On August 23, the radar developed a ground which rendered it inoperative. After two days searching several burned out resistors and capacitors were located and replaced. The radar was again made operative, but its efficiency was doubtful.

Communications were very good between this task unit and Commander Task Force SEVEN through NPM.

Radio reception was complete at all times; however, when NPM shifted from the 8 thousand to the 12 and 16 thousand bands at 1900 G.C.T., radio reception off Kavieng became very difficult.

Sound conditions off Truk were from fair to good. The maximum range at which bearings were obtained was about 6000 yards. At Kavieng sound conditions were excellent. Bearings and screw counts were obtained on destroyer screws at 10,000 yards. During the heavy rain storms which occurred frequently in this area the sound gear was nearly useless because of the heavy background noise caused by the rain.

There were no definite density layers observed.

The health of the crew was excellent. The habitability of the ship was very good thanks to the efficient operation of the air conditioning plant.

During submerged operations the following meal hours were observed:

The food was good and well prepared.

(16.) The patrol was ended by orders of Task Force Commander.

In the vicinity of Truk, there appeared intermittently on the normal radar line log, thin, vertical lines topped with small blocks which curved continuously back and forth across the screen. In addition, there were brilliant half moon shaped interferences which blocked out half the normal line. Both of these indications were present several times during dark nights when our own submarines nearby would not, presumably, have had their radars in operation. Possibly the explanation is the presence of enemy shore radar or radar detector.

It is not possible for one submarine effectively to cover Otta Pass. Royalist Reef lies close athwart the pass, necessitating submerged patrol on one side or the other; or leads one, as it did us at times, to try to be in two places at once by covering the approaches to Royalist Reef itself.