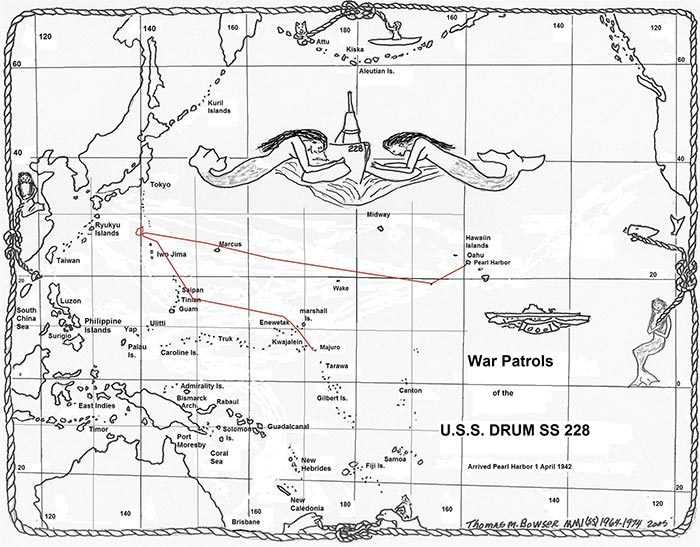 During the dive to test depth on January 1, 1944, the conning tower took a permanent set at all four corners on the horizontal centerline.

Left Mare Island on March 22, 1944 with a new thick hull conning tower, and all alterations completed. 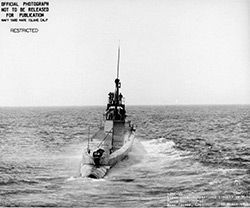 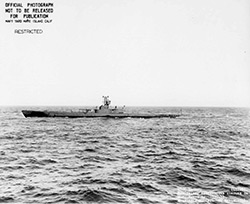 On April 18, 1944, while enroute to the area, a local disturbance was encountered in Lat. 22 N., Long. 161-30 E. This was interesting in that wind and sea to force 5 began abruptly, after passing through a heavy squall. The wind gradually hauled to the eastward. By April 20, 1944 sea was calm, skies clear.

In the Bonins and Kazan Retto, sets of about one knot were encountered when close to the islands, predominantly to the southward. Southerly winds decreased this set.

No set was experienced when well off the islands both to the westward and to the eastward.

Heavy tidal rips made depth control and steering difficult off the northeastern tip of Ototo Jima.

No navigational aids were sighted.

The anti-submarine air patrol in the Bonins and Kazan Retto was not heavy enough to prevent a surface patrol. However, on April 24, 1944 seven contacts were made, and on April 26, 1944 five more. Two or three contacts were the usual thing. Some of these contacts, no doubt, were planes in transit from Haha Jima to Iwo Jima.

No echo ranging was heard during the entire patrol. In the approach on May 21, 1944, Drum used standard speed and flooded negative when going deep within 500 yards of an escort. There was no indication whatsoever that this escort or either of the other two with the small ship knew there was a submarine in the vicinity.

The pit log was unreliable throughout the run. Early in the patrol the bellows was renewed, and operation improved. However, constant attendance was required in order to keep the operation of the pit log even semi-satisfactory.

On April 26, 1944, a near fire occurred in the main control cubicle. The resistance in parallel with the starboard main motor contact-maker (S3) became red hot because particles of cork prevented complete closure of the contact points when the controller was put in the S3 position.

On May 3, 1944, an usual swishing noise was discovered in the starboard shaft or propeller. The shaft does not squeal or vibrate at any speed. This noise commences at about 80 RPM at periscope depth, but does not start until about 130 RPM at 250 feet. A careful inspection will be made during the next refit to determine the source of this noise.

Radio reception was satisfactory in the Bonin Islands. Transmission to stations in the Australian area was more successful than to NPM.

The following information was obtained while in the area in connection with signal strength of the Haiku Fox schedules.

Japanese interference was encountered on 6380 Kcs. and 450 Kcs., although it was not heavy enough to prevent copying.

The performance of the SJ radar was gratifying. Ranges up to 120,000 yards were obtained consistently on a 2630 foot peak. (Kita Iwo Jima).

A method of determining extreme ranges accurately would be advantageous for navigational purposes. A strip of celluloid with ranges measured from 44,000 to 80,000 yards, was used on the PPI to obtain accurate ranges to 80,000 yards. Beyond this, rough estimates only were obtainable on the "A" scope.

Enroute to the area, the radar lost sensitivity, and failed to pick up a submarine beyond 6000 yards. Several tubes were replaced and set tuned on the submarine. Operation was excellent until more than a month later. On the last day in the area, the radar failed to put out a transmitter pulse. After six hours of troubleshooting, the following failures were discovered and remedied:
(1) The 5D21 Keyer tube (V-9) had an intermittent open circuit.
(2) V-7, in the bias regulator network, failed.
(3) C-22A was shorted to ground.

When these failures were remedied, a satisfactory echo was obtained from land at 75,000 yards.

Until May 13, 1944, the SD performed superbly, getting plane targets consistently to 20 miles. On that date the radar failed and two tubes were renewed. Subsequently the performance was but fair.

Proof of poor performance lies in the fact that until the failure of the tubes, only one plane, of 29 contacts, was sighted that was not picked up by the radar. After the failure, however, 7 out of 13 were sighted before the radar made contact, or, in some cases, without the radar making any contact.

While in Japanese waters, the SD radar was used five seconds out of every minute.

Only two sound contacts were made during the entire patrol. One patrol boat was picked up at 3500 yards, while the ship sighted on May 21, 1944 was heard at about 4500 yards.

In general, background noises were not high in the Bonin Island area.

The JP-1 sound gear, installed during the navy yard overhaul, proved of little value except when running silent. The bowplane tilting motor, (within twenty feet of the sound gear) could be heard all around the dial, loud enough to preclude hearing anything else with the JP-1.

In the Bonin Islands, the following data was obtained from daily trim dives to the depths shown in the table. Since no attacks were made, no use was made of this information.

Since the entire patrol was on the surface in cool spring weather, the boat was comfortable all the time. This fact also cut the time lost due to minor ailments to a minimum. Two mild cases of catarrhal fever each were cured in three days.

The food was well prepared throughout the run.

An intensive training program was carried out during the entire patrol. Since the ship was out of the areas five months, to the day, much indoctrination of the new officers and men was necessary.

Two officers, one qualified and one unqualified, were detached during this overhaul period. Four ensigns, two graduates of submarine school, one radar school graduate, and one newly appointed (after eight patrols as chief fire controlman on board), reported for duty. These four officers and one lieutenant (jg) on his second patrol stood watches as follows: one day as coding officer, one night as conning tower watch and SJ radar supervisor, and three days as junior officer of the deck, one with each of the top watch officers. In addition, daily lectures were held by the executive officer on navigation, compensation and diving, battery charging (by the engineer), watch standing and log writing, maneuvering boards (by the Captain), magnetic compass compensation, ship handling alongside, fire control and TDC operation.

Enroute to the area, daily fire control problems were held using either the TDC or the DRT to solve the problems run on the other instrument.

Daily dives for all watch sections were made enroute to the area. Many dives were timed in 45 seconds, which time is 6-7 seconds less than ever before. The new TRIGGER type bridge and the conversion of #4 M.B.T. to F.B.T. are the only changes made since the ship was last at sea.

While in the area, all unqualified officers working with the unqualified men one hour each day, each with his own section. The method of instruction was left to the discretion of the individual officers. More men were qualified than on several succeeding patrols, but the real value of this system lies in the fact that all hands now are definitely better submariners, whether qualified or not.

* NOTE: Includes short periods of 2 and 4 engine operations. All fuel used above includes that used in charging.

In connection with the speed of the ship with #4 M.B.T. full, the following information is submitted:

The lack of contacts in the area was most disappointing. There were a total of 12 contacts with enemy craft. The total tonnage of these, including all escorts, was 7330, or less than one good sized ship!