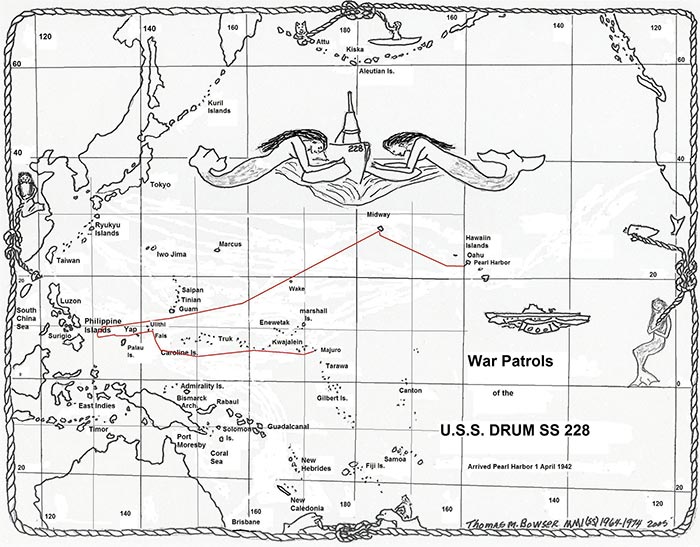 Arrived in Majuro, Marshall Islands from ninth war patrol on May 31, 1944 in good material condition. Normal refit, with no alterations or major work, was accomplished by U.S.S. SPERRY, and SubDiv 101.

Four days were spent in training during which three Mark 14 exercise torpedoes and all guns were fired.

In the Yap-Ulithi area, weather was generally good although the cloud cover was usually 0.8 to 0.9. The breeze was consistently easterly and the visibility was good.

Near the Palau Islands, much squally weather was encountered. Cloud cover was usually 0.10. Sea was generally condition 2 to calm.

After leaving station, a typhoon was encountered west of the Mariannas. Wind velocity increased to 35 knots and sea to condition 6. The barometer dropped to a minimum of 2935 as the center passed north of us. From every indication, the typhoon, at 1700Z, 2 August, was centered near 23° N. and 140° E., while despatch information located its center at 20° N. and 133° E. at this time.

In the Yap-Ulithi area, the set was consistently westerly; drift about one knot.

West of the Palau Islands (60 to 100 miles offshore) the set was southwesterly; drift 0.4 knot.

Lighthouses at Urukthapel, Angaur, and on the northern tip of Babelthaup were sighted but were not lighted.

H.O. chart No. 6073 was used and is far superior to any charts of the area previously issued, including Restricted #10394. The landmarks are well described in SEAHORSE first, GURNARD second, and GAR tenth war patrols.

Type of submarine camouflage on this patrol - Modified Grey.

One 500-700 ton Yard Oiler escorted by 1 PC and 1 SC. Contact made on SJ radar at range of 15,600 yards. Target group tracked until speed and zip plan determined. Attack made in rain squall with poor visibility; target no sighted until after firing. Four torpedoes fired from stern tubes with 1.5° divergent spread, torpedo run 1490 yards, 60°P track. Target not identified until seen through periscope next day. Torpedoes ran under.

Observed 42 4 inch and numerous 20mm and 30 caliber shells hitting among buildings. Extent of damage not possible to determine. No large fires were started.

Approached Refinery Point, Fais Island, from northward, with near full moon over island, elevation 50°. Ran parallel to shoreline at 5 knots. Opened fire on Refinery Point with 4 inch at 4000 yards and continued firing to 1800 yards. Used radar ranges to point with up and down ladder applied. At 1500 yards opened fire with 20mm and 30 caliber machine guns and closed to 1100 yards. At minimum range, two large buildings were visible, but it was not possible to observe extent of damage.

Observing 12 to 15 hits with 4 inch HCPD ammunition and numerous hits with 20mm and 30 caliber machine guns. Target left blazing from stem to stern.

Battle surfaced with range to our target, second sampan in column, 3800 yards. Opened fire with 4 inch. Second and third salvos were straddles. As target did not return fire, checked fire to close range. At 2100 yards, opened fire again, range still closing. Observed second salvo to hit at water line. Numerous 4 inch hit after this. Opened fire with 20mm and 30 caliber. The 4 inch hits smashed his wooden hull and deck house and sent timbers flying, but did not stop him. After a few 4 inch hits, 20 to 25 passengers were seen to abandon sampan. When the range decreased to 1000 yards, target turned toward and headed for us bearing 090° relative, 4 inch fire was checked. At 600 yards, two 4 inch salvos hit and demolished his deck house, stopping him. One more salvo at 500 yards set him afire.

After Drum had opened fire on second sampan, BALAO closed and handled the leading sampan (Number Seven Nissyo Maru) in a similar manner.

The trawler which stayed with us the evening of July 5 had apparently been coached on by the plane which forced us down. Such cooperation is practical in this area (Yap-Ulithi) because the enemy knows a submarine is on constant lifeguard duty here. The enemy knew of the ALBACORE's presence before we arrived; thus we were, in fact, detected before arrival on station.

This is an unfortunate condition causing mental and operational hazards, though it must be accepted.

Night radar planes were encountered on three occasions in the areas around the Palau Islands. They were deteced by the SJ radar at a maximum range to 16,000 yards and were identified by the fast closing range. No interference was present on the SJ screen nor were there any indications of enemy radars on the APR. Our SD radar was not in use.

Before the carrier strike on July 25 there was considerable air activity in the Palau areas. Medium bombers were used for anti-submarine patrol offshore while float planes were observed searching near Malakal Pass, Angaur Island, and Toagel Mlungui Pass. During the three days we spent in the areas after the strike, no plane contacts were made. The day following the last strike, we patrolled on the surface, in company with the BALAO, less than 30 miles west of Angaur.

During two of the five days we spent submerged off Toagel Mlungui, two Chidoris made anti-submarine sweeps out of the pass. They were pinging and were detected as soon as they cleared the reef. One afternoon, an SC accompanied them. He limited his patrol to within about six miles of the reef and was not pinging.

The SC and PC that were escorting the Yard Oiler contacted the night of July 21 pinged continuously. They did not patrol station but remained on a steady course less than 1000 yards from their convoy and did no hinder us in our night attack. After the end of run explosions, the target turned towards us but the escorts made no apparent effort to locate us.

The convoy's zig plan was as follows:

On July 30, salt water was found in the port reduction gear lube oil. Investigation disclosed a leak in the Harrison Radiator Heat Exchanger. The faulty cooler was replaced by a spare and normal operation followed.

The excellent material condition of the Drum after 10 war patrols is certainly a credit to Portsmouth Navy Yard, the building yard. The excellent operating performance of all machinery during the two patrols since the last navy yard overhaul is a credit to Mare Island, the overhauling yard.

2. 17370 KCs was audible but the signal was too weak to copy. 4525 KCs was continuously jammed and thus useless although the signal strength was strong.

The SD radar was erratic and undependable from the beginning of the patrol. Four days out of Majuro it failed to pick up a medium bomber sighted at 6 miles, although it did pick up 23 Liberators at 25 miles a few days later. Both transmitter and receiver were thoroughly checked and found to be operating satisfactorily. From June 28, SD mast megger readings varied from 3000 ohms to infinity. Until July 15, the date of the final failure, readings were brought up to an acceptable value by diligent cleaning. After this, 40,000 ohms was the maximum reading that could be obtained. Since the antenna output was therefore low, the SD was not used again.

The loss of the SD in the area is not considered a great handicap. We conducted a surface patrol without it, and apparently sighted all planes before we were sighted (none dropped any bombs). If the SD is not in use, at least there is no possibility of the enemy "DF ing" it.

Sound conditions both near the Palau Islands and offshore were fair to good.

South of Yap the night of July 5, our inability to hear the trawler at ranges greater than 2500 yards made evasion difficult.

Before leaving Majuro, a member of the Columbia Research Laboratory spoke to the officers and predicted that large gradients would be found in southern waters at this time of year, and digests of other patrols indicated likewise. However, the largest total drop in temperature encountered in the Palau areas was 3° to 300 feet.

During both the surface patrolling and the few days spent submerged, the boat was very comfortable. While submerged, the ventilation system was rigged as recommended by ComSubPac (letter FF12-10/S38/(70) Serial 1045 of 30 May 1944). This method was found to be an improvement over the usual method of ventilation.

The food was palatable and well-prepared throughout the patrol.

The training program this patrol was similar to that employed last patrol. The unqualified men were divided into small sections and each section was turned over to one of the unqualified officers for instruction. This method has proved advantageous to both the men and officers.

The five unqualified officers rotated their watches among a coding watch, night conning tower watch, and the three junior officer of the deck watches.

Enroute to the area and on the return voyage, training dives, controllerman drills, and fire control drills were held daily.

Drum conducted two separate lifeguard missions during the patrol; one with the Army at Yap, the other with the Navy during the carrier strike on Palau.

During the Palau strikes, voice communications left nothing to be desired. We were fully informed of the situation at all times. In addition, we were able to work well in conjunction with the BALAO, who was stationed some 25 miles southwest.

The communications with the Army at Yap over a period of seven days were pitiable. Although voice transmissions were heard frequently during the strikes, no communication could be established with the planes in spite of our attempts on two different days.

Had communication been successfully made on July 3, 1944, Drum probably would not have been strafed by the enemy fighter. The Liberators must have seen us, since they were only 3 miles off when we were forced down. Yet, with one plane smoking, and possibly in trouble, they made no apparent effort to apprise us of the situation.

Further, on July 6, 1944, twenty-four planes were sighted returning from Yap, while Drum was searching for aviators reported down. (Which information came to us from ComSubPac). We made an attempt to get the aid of the Liberators in our search but received no answer. One plane for a half-hour would have searched more area than we covered in 2 days.

Although I have given the matter much thought, I fail to understand the utter lack of coordination and cooperation on the part of the planes during this lifeguard mission.

While Drum was lifeguarding on the surface off Palau on July 26 and 27, 1944, several panoramic pictures were taken of the islands.

Pictures of Angaur, Peleliu, Eil Mald, Urukthapel, and Babelthuap Islands were taken at ranges varying from 5 to 3 miles both through the periscope and from topside.

Although several boats have reported difficulty in piloting the vicinity of Malakal Passage (and we had some the one day we were submerged there), no trouble whatsoever was experienced in identifying the landmarks while on the surface.

It is hoped that the photographs will show the landmarks plainly enough to be of some help to the boats who may still patrol the Palau areas.

This is the second successive patrol during which no contact worthy of that name has been made. This patrol a 500 ton yard oiler was the largest ship sighted. Last patrol one 1900 ton ship and two 1200 ton ships were sighted.

Though morale remains high, it cannot continue to do so, unless "battle stations" is heard more frequently. Four officers and twenty-eight men have never heard a depth charge dropped close aboard with a "Drum tag" on it.

4. Sketch of Interference on SD Screen 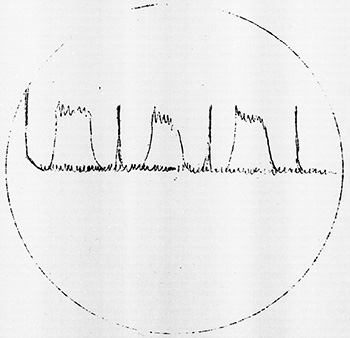