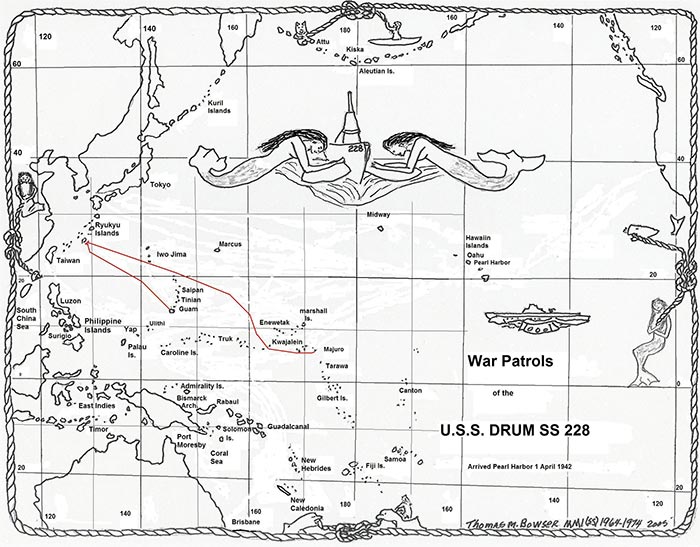 The weather in the areas around the Nansei Shoto group was, in general, as predicted by the pilot charts, and coast pilots. The sky was completely overcast with fair to poor visibility the greater part of the time. The wind was consistently northeasterly to northwesterly, force 2 to 3 with resulting condition 2 or 3 seas.

During the twelve days spent in the area east of Amami O Shima, wind and sea conditions abated somewhat and a number of days of calmer seas were encountered. The sky was overcast throughout this period and the visibility was never better than fair, being poor much of the time.

The currents encountered in the areas around the Nansei Shoto group corresponded to those predicted by the pilot charts, current charts, and coast pilots. The effort of the Kuroshio was felt both east and west of the islands and it was noted that as the force of the northerly wind increased, the set due to the Kuroshio decreased.

The only lighthouse sighted was Sotsuko Zaki Light on Amami O Shima. It was not illuminated.

Type of submarine camouflage on this patrol - Standard Gray.

Convoy of 5 freighters, 4 MFM medium AK's (EU), 1 KFK medium AK (EU), disposed in two loose columns. Escorts consisted of 2 DE's (DE-UN 2 type - EC), and on trawler. One DE was stationed on the starboard bow of the convoy with the trawler on the port bow and the second DE on the port beam of the formation. First contact was screws on the JP sound gear. A plane was seen soon thereafter on the same bearing, circling low. Smoke was then sighted. Visibility was good.

Periscope attack made in choppy sea. Attack made on largest ship in convoy, the last ship in nearer column. Just prior to firing, target was shifted to group of four overlapping ships, using one as a point of aim and using spread to cover 1000 feet of target length. Intention was to fire stern tubes at original target but forced deep by escort prior to reaching firing position.

No mines or mining activity were encountered.

No unusual anti-submarine measures were encountered in the Nansei Shoto areas.

On December 28, 1944, two patrol vessels made a dawn anti-submarine sweep to the northeastward out of Yakiuchi Wan but this was not followed by any shipping movements.

The DE's escorting the convoy attacked on 30 December were pinging on 21 Kcs. Their counter-attack after our unsuccessful attack was not very accurate. They never had a sound contact. Evasion tactics consisted of running away from the scene of the attack at two-thirds speed at deep submergence.

No radar equipped planes were encountered. The convoy attacked had an air escort which was sighted circling low over the convoy prior to sighting smoke.

The 155 mc radar encountered on Takara Shima was probably an anti-submarine radar. When we were within a range of 10 miles, this radar frequently gave a saturation indication on our APR but no offensive measures were taken by the enemy. It is therefore difficult to evaluate the APR indications.

The 81 mc radar encountered east of Amami O Shima was probably an aircraft early warning radar and is believed to be positioned on Kikai Jima Island.

The engineering performance throughout the patrol was very satisfactory. The only casualty was a cracked water jacket liner of #3 unit on #1 main engine, necessitating replacement of the liner in the refit period. This is the same type of casualty as occurred on #1 main engine during the Drum's eleventh patrol. The casualty did not hinder engine performance.

The I-C Motor Generator set-up is still unimproved. This being the second successive patrol in which both I-C motor generators have operated continuously while on surface cruising. The I-C load is of such magnitude now that any slight increase overloads the circuits, as such is the case when the SJ motor generator is inoperative.

The following is a resume of the reception of the submarine fox schedule in the areas around the Nansei Shoto group during the period 19 December to 14 January.

SJ-a Overall radar performance was good; although persistent failure of rectifier tubes in regulated rectifier A gave some trouble which was not satisfactorily remedied. Sudden opening or closing of the main power switch or surges of ships line voltage have blown rectifier tubes on several occasions. This unit will be tested thoroughly during refit.

A major trouble was the characteristic failure of the SJ motor generator after 20 days service. Inspection revealed worn commutators, especially the exciter; badly grooved speed regulator contacts; intermittent open circuit on a control resistor; and another control resistor which seemed to have changed value. Attempts to repair it were unsuccessful and subsequent operation was from the already overloaded ships I-C power. With present I-C capacity it is impossible to run both SD and SJ at the same time. During only one patrol has this motor generator lasted more than six weeks; a more dependable power source is badly needed.

SD-a This radar was used only going to and from station, intermittent keying being employed. Its operation was satisfactory.

IFF Used only in conjunction with SD-a; gave satisfactory performance.

Both supersonic sound sets operated satisfactorily throughout the patrol. In spite of the instance in which the JP contacted the convoy prior to the sighting of smoke (screws were reported once - contact was not regained until close range), it is not felt that proper results are being obtained from these gear and it will be thoroughly checked during the coming refit.

Because of the scarcity of contacts, it is difficult to estimate the sound conditions present in the areas around the Nansei Shoto group during this patrol. However, sound conditions were fair to good the two days contacts were made.

The pinging of the patrol boats encountered on 28 December was heard at an estimated maximum range of 12,000 yards while screws were heard to a range of about 5000 yards.

The original contact on the convoy of 30 December was on screws by the JP at extreme range - about 2200 yards - but this was only a momentary contact - it could not be held. Pinging was heard at about 2000 yards and screws at 8000 yards.

Density layers in the areas around the Nansei Shoto group were non-existent. Straight line traces were recorded daily to a depth of 300 feet.

The health of the crew during this war patrol was exceedingly good. Only 3 man days were lost, due to one case of gastro-enteritis, acute.

The food was palatable and well prepared. One new cook and one new baker did very good work on their first patrol and as a result the meals were much improved over the preceding few patrols.

The boat was very comfortable throughout the patrol. With the injection temperature lower than the Drum has been accustomed to, and the control room supply blower and air-conditioning unit, the entire ship was cool most of the time.

The state of training of both officers and men remains high, despite the large turnover in personnel during the past year. This is attributable to the generally good replacement material found in the relief crews and the manner in which these men take to the indoctrination by the old hands.

As has been done in the preceding three patrols, school of the boat classes were conducted for the unqualified men by the unqualified officers. This method continued to be beneficial to both instructors and students.

Although the end of this patrol occurred early as a considerable surprise and the subsequent journey to the refitting base was a matter of only 4 days causing the education program to be somewhat "caught-short", it is expected that a fair number of those eligible will qualify or secure their advancement in rating.

(U) Radio and Radar Countermeasures

3. Enemy radar was land based.
(a) Enemy installation was not seen; probably located on Amami O Shima.

7. Action of enemy radar, including distances and bearings at which he searched, tracked, faded, etc. - With full gain on APR and SPA, obtained about 2/3 saturation signal at 18 miles.

6.
(a) Radar was used for surface search.

3. Enemy radar was landbased.
(a) Enemy installation was not seen, possibly located on Kikai Jima

6.
(a) Radar was used for air search.
(b) Evidence for this conclusion - characteristics of radar

Sixteen Mark 18-1 torpedoes were carried forward on this patrol.

No difficulty was experienced in handling or maintaining them. No watering was necessary. Only three hydrogen eliminator wires burned out. The average time between charges was eight days, average gravity drop was 18 points, and the average temperature was 78°F before and 87°F after charging.