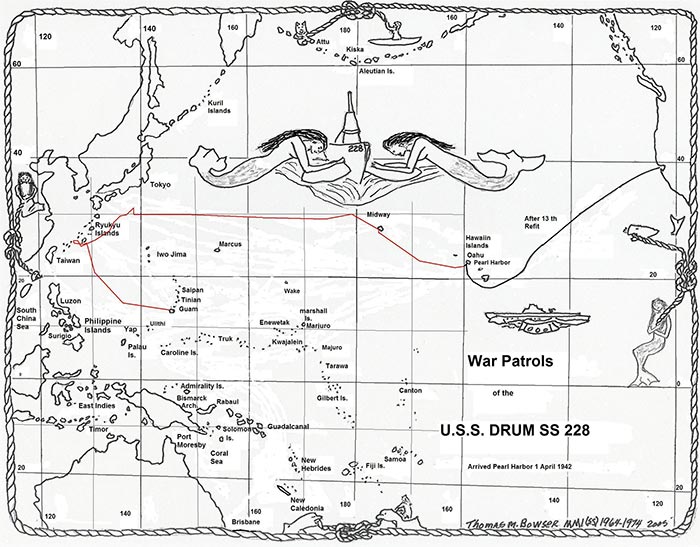 Four days were spent in training during which three Mark 23 exercise torpedoes were fired, two of which were used to simulate Mark 18.

In the area around Okinawa Jima the effects of the Japanese current were strongly felt. Off Yoron Jima a northeasterly set drift 2.0 knots was experienced. In the Sakashima Gunto area the currents are extremely variable. The westerly ocean current hits the Kurashio and causes a variety of currents. Westerly, northwesterly, and northeasterly sets were experienced on succeeding days in a 20 miles square area south of Tarama Jima. The drift was consistently 1.0 to 1.5 knots.

No navigational aids were sighted.

No attacks were made.

No anti-submarine measures were encountered.

The major casualty was a set of leaky lube oil reduction gear coolers. The starboard cooler was removed and replaced with a spare. The port cooler was removed and replaced with the repaired starboard cooler. The leaky coolers necessitated the renewal of the oil in both reduction gears and sumps. Luckily the repairs made held up for the remainder of time at sea; it is doubted if further repairs could have been made.

The superstructure is definitely a hazard to any attempt at silent running. A few days out of port, banging noises were picked up by both JK and QB sound gears. At night, rattles and banging sounds were heard both fore and aft. Side plating and supports should be extensively renewed at first opportunity.

All transmissions were receipted for promptly by NPM or NPN.

In reception from NPM, 9050 Kcs has good keying, poor signal strength, usually fades from 1600Z to 2100Z, and is jammed by high speed keying about 2100Z. 4515 Kcs has too much jamming by Nips for good reception. 6045 Kcs has good signal strength, good keying, but reception is only fair because of jamming by Japs and a Jap broadcast station almost on the same frequency. Reception on 13,655 Kcs and 16,730 Kcs was very good.

In reception from NPN, 9090 Kcs had good signal strength, poor keying, and no jamming.

Reception from NKN was subjected to jamming and in general was poor.

SJ-a Performance of the SJ-a radar was satisfactory until the latter portion of the patrol, when a series of troubles reduced its range efficiency.

For several nights prior to 18 March intermittent deafening noises of a chattering, grinding nature emanated from the antenna gearing system, apparently from the worm drive. The reduction gear-clutch assembly was dropped, worm gear removed, and inspected. Lack of lubrication was evident and it was found that the goose-neck oiler was stopped up so that oil from the cup was not reaching the gearing. With proper lubrication the operation has been normal.

Several tubes failed in the Range Unit and for several days following replacement it was necessary to adjust R587 and C539 to cure a jumping step.

On March 21 a slight flicker of K.V. and H.V. Rectifier current was noted. Inspection showed C22A-B leaking considerable oil. This was replaced but ragged pulsing and high current was then evident. A complete check of the Mod. Gen., Bias, and Pulsing circuits was made. Potentiometer R-1 in the grid circuit of the "On-Time" MV was found to be defective and replaced. Operation was apparently normal, but upon running toward land for a range check, the island was picked up some 10-15,000 yards short of the expected range. Troubleshooting was complicated and prolonged by a new VR-105-30 being packed in a VR-150-30 box.

Consistent low voltage and flickering output of the motor generator forced use of the I.C. power throughout the patrol.

SD On 24 March when SD was turned on, it would not focus or tune and eventually smoke was seen to come from the receiver. Inspection showed that quite a bit of condensation from a nearby ventilating outlet had been blown into the receiver. When dried out and several 9001 tubes replaced, operation was apparently normal.

On March 9 the QB sound gear was found to be out of commission. One of the two leads running from the sound head through the training shaft had parted at the point where the leads were soldered to joining connecting leads from QB junction box in forward torpedo room. It is believed that the soldered connection was broken by constant bending back and forth of the leads while the shaft was being trained. This design feature could be improved by strengthening the connection to prevent parting of the leads.

The health of the crew was satisfactory throughout the patrol. Eighteen man days were lost from on case of jaundice, one of catarrhal fever, acute, and one of gastro-enteritis, acute. At the start of the patrol there were several cases of low grade food poisoning - none of which resulted in man days lost. This food poisoning was thought to be caused by bad orange juice. (Vita-Pack brand, packed by K&R Fruit Products, Inc., Upland, California).

The performance of the cooks was not up to par. They were in a rut. Cooks are born and not made.

Habitability was excellent throughout.

The training program for unqualified men is believed to be very thorough. All unqualified men are divided into three classes of 7 or 8 men to a class and each class under the instruction of an unqualified officer. The class guides each man in learning the boat; further and more detailed information is given by leading petty officers. The class serves a double purpose by instructing the men and the officers as well.

This vessel lifeguarded one day for a carrier strike on Okinawa. The BLUEFISH to the north had the same reference point. Also two or three Dumbos were using the reference point code name. This meant that a distress call may have been answered by 5 different people. Two times during the day our fighter cover could not locate us and came in on VHF to call us by the code name for the reference point. One air escort for the BLUEFISH did this and we answered up with our assigned position. We had four escorts for some hours, undoubtedly ours and the BLUEFISH's, while the BLUEFISH probably had none. At one time to identify ourselves to one puzzled aviator we told him by VHF we are turning 90° right to that he could decide whether he was over us or over the BLUEFISH.

Over a ten day period we were plane guarding for four B-29 strikes on Honshu. The Dumbos made contact and circled us with no trouble. In two strikes over 125 planes were checked off going and coming with no trouble evidently, as we had no calls for assistance.